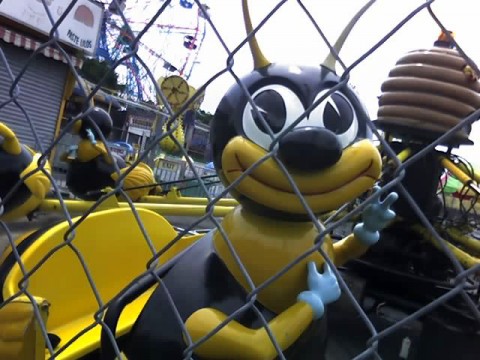 a glimpse at your inner beeing

Brooklyn, New York. One of Luna Park’s, Coney Island’s more recent additions, (appropriately shown here thru chain link fencing) is known simply as ‘The Kierkegaard’ – which uses the metaphorical symbol of an oversized cartoon bee to represent exploration of the self (while being spun around in circles for about three and a half minutes).

According to wikipedia Søren Kierkegaard is regarded, posthumously as the father of existentialism, asserting that ‘the individual is solely responsible for giving his or her own life meaning and for living that life passionately and sincerely, in spite of the many existential obstacles and distractions including despair, angst, absurdity, alientation, and boredom.‘

The Kierkegaard went live in May 2008 despite assertions from the General Mills Company that the cartoon bee was “a direct knock-off” of their Honey Nut Cheerios brand mascot. Representatives from Luna Park could not be reached for comment.